Cuba in the CELAC-EU Summit and the NGO wolves 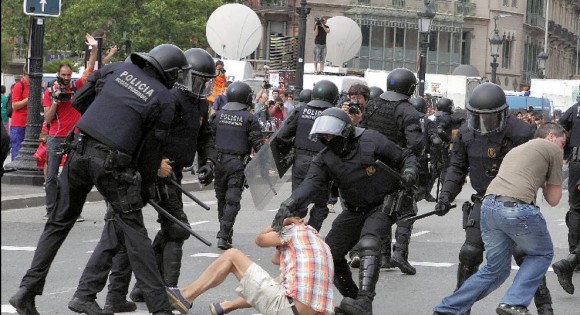 On 10 and 11 June, the Second Summit between the Community of Latin American and Caribbean States and the European Union (CELAC-EU) takes place in Brussels, with the aim of assessing bi-regional relations between both parties. At the conclusion of the Summit, between the 15 and 16 June, Cuba and the EU will resume negotiations on the bilateral Political Dialogue and Cooperation Agreement between them. One of the anticipated topics for discussion is the so-called Common Position that the EU has taken against Cuba since 1996 and that has obstructed the improvement of relations, because of its interventionist nature which mirrors the US blockade of Cuba.

For its part, the frustrated anti-Cuban ultra-right-wing continues its efforts to boycott any rapprochement between the US and its allies, and Cuba. At the last Summit of the Americas in Panama, when Presidents Obama and Raul Castro met, there was no lack of provocations from these small counter-revolutionary groups. Even the murderer of Che Guevara participated in a provocation in front of the Cuban embassy in Panama. Days later, North American journalist Tracey Eaton revealed the salaries received by some of those individuals to carry out the provocations in a post on his blog Along the malecón.

Such information is no surprise when the US government continues to approve an annual budget of $20 million ($30 million for 2016) for the promotion of ‘democracy’ in Cuba. That is, to finance programmes of subversion against Cuba through ‘NGOs’, independent associations, opposition groups, among others, in order to achieve ‘regime change’.

This time, the anti-Cuban NGO ‘People in Need’ (PIN) is convening an ‘assembly’ through the platform Europe-Cuba Network to coincide with the dates of the CELAC-EU Summit in Brussels with the aim of encouraging a negative stance towards Cuba. They are also seeking to use the issue of human rights to pressure the EU: ‘human rights’, ‘democracy’, and ‘freedom’ are a few of the worn out arguments of the Cuban counter-revolution, exact copies of the arguments used by the White House and the imperialist countries when they need a pretext to carry out (or support) coups and invasions, or to discredit governments they do not like.

Like other NGOs, PIN is financed by the United States, through the US Agency for International Development (USAID) and the National Endowment for Democracy (NED), and by the Czech government. Between 2006 and 2011, PIN received $675,077, and another $194,544 in 2013. It is not the only Czech institution that promotes ‘regime change’ in Latin America. The Czech Centre for Studies and Analysis for Latin America, CASLA, recently announced that it would provide ‘technical assistance and backing’ to ‘dissidents’ in Cuba and Nicaragua.

PIN presents itself as a mere humanitarian organisation when in reality it is a wolf in disguise, promoting destabilisation of countries’ institutional order through the following means: media manipulation of events, fostering civil disobedience, organising and training protagonists, for example, anti-Cuban leaders and in the violent road blocks in Venezuela. They orchestrate campaigns to distort reality aimed at young people through social networks, like the Cuban Twitter, ‘Zunzuneo’, set up by USAID and exposed by the AP news agency.

Created by PIN, the Europe-Cuba Network (cubalog.eu) brings together 22 websites that appear to be clones because of their subversive anti-Cuban profile. These websites belong to NGOs in 12 European countries and pretend to act as human rights advocates; a clear manipulation of a sensitive theme that they distort through a campaign of lies. PIN, that receives part of the US budget through NED, was set up by people with links to US Special Forces, such as Frank Carson from the Center for a Free Cuba and Carlos Alberto Montaner, both of whom have been denounced as CIA agents. Since its foundation this platform has promoted the overthrow of the Cuban Revolution through the adoption of a similar strategy to that pursued by the US government and its special services in the Eastern European countries.

Europe, along with the rest of the world, is submerged in an economic crisis, with growing unemployment, evictions and migratory crises, to name just a few problems. At the same time, it is ‘normal’ to see police brutally repressing those who try to defend their rights.

Despite 50 years of blockade imposed by the world’s most powerful economy, Cuba has managed to meet the basic needs of all its citizens, including the most fundamental human rights: health, housing, food, education, culture and sport, have been some of the most remarkable sectors. It is not just Cubans who have benefited from the Cuban Revolution’s commitment to human development. At present, Cuba has medical collaborations in 68 countries, involving more than 50,000 health care professionals. In the last 10 years, Cuba has sent 41 medical brigades to 25 nations affected by natural and epidemiological disasters. Under Operación Milagro (Operation Miracle) 2.5 million people in 28 countries have received free (sight restoring) operations. The literacy programme ‘Yo Si Puedo’ (Yes I can) has enabled 7 million people in five continents to learn to read and write. Such facts, real achievements in the field of human rights, should embarrass any NGO, including PIN and its sponsors, who despite having millions of dollars continue to waste them.