Listening to the “incredible” without credibility - Otto Reich 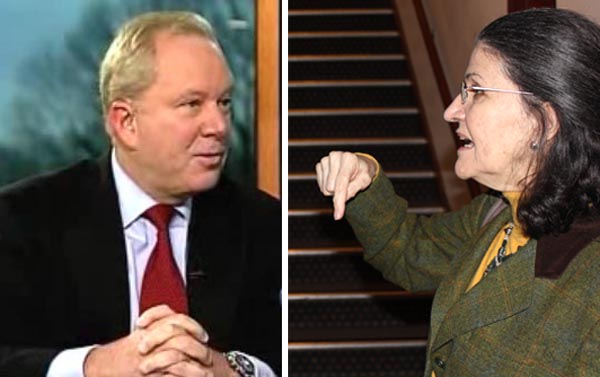 Here I was, at the Oxford Union, the 17th October 2014 listening to the notorious American Otto Reich who chose to serve the flag of the U.S. rather than to serve the people of Cuba. This is a man who departed from Cuba for U.S. soil instead of being with us during the literacy campaign, or the program vaccinating children to eradicate poliomyelitis in Cuba. Truly he is not part of Cuban achievement in Health and Education but is the worst enemy the Cuban people can ever have. Now he is here in the U.K. convincing who ever comes across his path that the Embargo against Cuba is the right thing to support. His first failure in this campaign was to convince the ex-British Ambassador in Cuba, Mr John Dew.

I was asked by the organizers of the Al Jazeera TV program “Head to Head” to ask one short question of Mr Otto Reich, no comment or introduction allowed, it had to be 15 seconds and no more. Otto Reich was the special guest of the program interviewed by the sharp journalist Mehdi Hasan. During the first part of the program, which will be available in the first weeks of December, Medhi managed to unveil few inconsistencies between what Reich said and what he actually did and what he was involved in , as well as some facts around different historical moments in Latin America where Reich justified US policy and actions in the region.

I will not give away more information of this program, which I strongly recommend to watch once edited. However I cannot wait so long to expose Mr Otto Reich.

Can Mr Otto Reich explain why Cuba is on the list of terrorist countries and if it is the way to re-enforce the trade and financial restrictions to Cuba when the Embargo will be finally lifted?

“Cuba is a terrorist country because of its actions of exporting weapons to North Korea and by shooting down a plain in International waters in which four men lost their lives” I couldn’t exercise the right of reply due to limited time of the program.

The first point to which Reich referred was the incident last year of the North Korean ship seized by Panamanian authorities in the Canal, carrying 240 metric tons of obsolete defensive weapons manufactured in the 1950s. Cuba explained that they were being sent for refurbishment because of the need to maintain Cuba’s defensive capacity to preserve the national sovereignty. Fact: Cuba would not need to divert resources for defensive capacity in the absence of U.S. hostility and the actions of terrorist groups based on U.S. territory or if the Bay of Pigs invasion to Cuba never had happened. Fact: Cuba is included in the list of “State sponsors of Terrorism” since 1982 by the United States Department of State, long before the incident Otto Reich referred to. The inclusion of Cuba in this list might be related to the Cuba’s assistance to Angola specially in the decisive battle of Cuito Cuanavale (1975 -1987), but bringing this subject up now might be too embarrassing for the U.S. since Nelson Mandela referred to: “[Cuito Cuanavale] as the turning point for the liberation of our continent—and of my people—from the scourge of apartheid”

I managed to discuss “face to face” with Mr Reich after the program and I focused in his second argument about the shooting down of the “innocent” aircraft in international waters by the Cuban air force. I told him that early this year I had the opportunity to attend to the International Commission of Inquiry into the case of the Cuban Five that took place in The Law Society, London. There, the Attorney for the Five, Peter Schey spoke of the U.S. government’s refusal to provide vital satellite images of the planes shot down after several warnings. This made up part of the evidence against Gerardo Hernández for which he is serving a double-life sentence. The air crew were members of the Brothers to the Rescue, a terrorist organization base on Miami with the mission to promote civil disobedience against the Cuban government by releasing political leaflets over Havana. Then, I insisted, to Reich that his allegations about shooting down planes is false because the evidence has never been shown. By this time Reich changed the conversation into Spanish pretending not to know about the case of the Cuban Five, or it could be that he was avoiding other people hearing and understanding what I was discussing with him.

Back to my question of enforcing trade and financial restriction to Cuban institutions. Reich didn’t say that European and multinational Banks were fined billions of US dollars for violating the International Emergency Economic Powers Act (IEEPA) and the Trading With the Enemy Act (TWEA) by illegally conducting transactions on behalf of customers in Cuba, subject to sanctions enforced by the Office of Foreign Assets Control (OFAC). All of those Acts and bodies are in place to ensure that the inclusion of Cuba in the list of terrorist countries is also a profitable business. Those billions of dollar fines seem to go to different U.S. entities such as Office of the Comptroller of the Currency (OCC) and Federal Reserve. The whole system of including Cuba in the list of terrorist countries seems to succeed in obstructing the Cuba’s trade and financial activities, by ensuring that banks end their business with Cuba and at the same time make money out of the forfeit process.

I found at the end of that evening that Mr Otto Reich definitely feels closer to the U.S. Federal Reserve than to the Cuban people left behind.