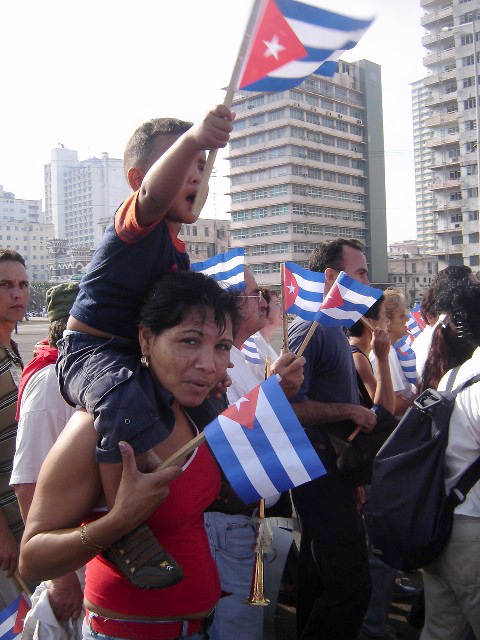 By Jim Lobe
WASHINGTON, Feb 12 2014 (IPS) – If President Barack Obama wants to move more quickly to normalise ties with Cuba, it appears he has gained the political space to do so, according to analyses of a major new bipartisan public-opinion poll released here Tuesday by the Atlantic Council.

The survey, which was conducted last month, found that 56 percent of U.S. adults nationwide now support normalising ties or engaging more directly with Havana, while just over a third (35 percent) are opposed.

“Not too long ago, voicing opposition to the embargo would have been political suicide in Florida.” — Marc Hanson

Perhaps more important politically, an even greater majority – 63 percent – of respondents from Florida, home to the greatest concentration of Cuban Americans, including several of the fiercest foes of the Castro government in the U.S. Congress, support normalisation and greater engagement. Only 30 percent of Floridians said they were opposed.

“Profound changes to U.S.-Cuba policy would be well received by the American people, and even more so, by Floridians and Latinos,” according to an analysis of the poll results by Peter Schechter and Jason Marczak, director and deputy director, respectively, of the Atlantic Council’s Adrienne Arsht Latin America Center.

“For decades, Florida’s politics trumped national policy. This is no longer true. While those opposing change have much emotion and determination on their side, it is clear that demography and immigration have changed the equation in Florida politics.”

The survey, which was conducted by experienced pollsters from both major parties, comes as a number of high-profile Floridians have called publicly for changes in U.S. policy toward Cuba, noted Marc Hanson, a Cuba specialist at the Washington Office on Latin America (WOLA), a think tank that has long supported normalisation.
Two Democratic candidates for governor, including one, Charlie Crist, who served as the state’s Republican governor as recently as 2011, have recently come out against the nearly 54-year-old trade embargo.

And just last week Alfonso Fanjul, one of two Cuban-American billionaire brothers who control most of the state’s sugar industry, spoke publicly about his recent visits to Cuba and his interest in doing business on the island.

In addition, another prominent Cuban-American business leader, Jorge Perez, called for stepped-up bilateral exchanges between the two nations and voiced hopes to soon feature Cuban artists – even those with ties to the government – at his new art museum in Miami.

“Not too long ago, voicing opposition to the embargo would have been political suicide in Florida,” according to Hanson. “But the [recent] public announcements show that the political calculus has changed and that supporting normalisation of relations is not longer a political liability.”

Indeed, Obama, who took a somewhat more liberal position on Cuba than his Republican foe, Sen. John McCain, nonetheless won Florida – perhaps the most infamous of “swing” states as a result of the 2000 election – in 2008.

After repealing several measures decreed by President George W. Bush restricting the ability of Cuban Americans to travel to the island and send money to their families there early in his first term, Obama won the state again in 2012, in important part by increasing his percentage of the Cuban-American vote there by 10 points.

Since those early steps were taken, however, Obama has been much more cautious, due primarily to the continued detention of a U.S. Agency for International Development (USAID) contractor, Alan Gross, who was arrested in late 2009 and subsequently sentenced to 15 years for distributing communications and computer equipment to members of Cuba’s Jewish community without a permit.

Most analysts believe that Havana hopes to exchange Gross for the so-called “Cuban Five” – Cuban intelligence agents convicted of spying and other offences in the late 1990’s – one of whom was released in 2011 and another expected to be released this month.

Nonetheless, Obama has taken some small steps over the last several years, including making travel to Cuba by U.S. citizens for educational, cultural and similar programmes easier and authorising low-level bilateral talks on a range of issues, such as migration, that had been suspended under Bush.

“They’re doing things on the margin of the policy but nothing fundamental,” noted Michael Shifter, president of the Inter-American Dialogue, a hemispheric think tank here which has urged the administration to take a more forthcoming position on Cuba, in part because normalisation would improve relations with Latin America as a whole.

The survey itself interviewed some 2,000 respondents. In addition to a sample of over 1,000 randomly selected adults, it included additional oversamples from 617 Florida residents and 525 Latinos.

Among other conclusions, the survey found that men were significantly more likely (61-51 percent) to favour engagement with Cuba than women; that more-educated respondents were significantly more likely to support normalisation; and that a 52-percent majority of self-identified Republicans – the party that has historically been most resistant to lifting the embargo – now favour change.

Nationwide, 62 percent favour allowing U.S. companies to do business in Cuba, and 61 percent favour lifting all travel restrictions on U.S. citizens who want to visit the island. For Floridians, the comparable percentages were 63 percent and 67 percent, respectively.

Given the partisan polarisation in the U.S. Congress, few analysts believe that legislation easing the embargo is likely during this election year. But some insisted that the survey results should encourage Obama – whose handshake with Cuban President Raul Castro at Nelson Mandela’s memorial service in December evoked little criticism here – to take additional steps through his executive authority.

These include removing Cuba from the State Department’s list of state sponsors of terrorism and making it easier bureaucratically for Cuban-Americans and other eligible citizens to travel to Cuba.

“The importance of the poll is that it will hopefully feed into the policy discussion over the next year,” Jake Colvin, vice president of the National Foreign Trade Council (NFTC), a heavyweight business lobby group that opposes the embargo, told IPS. “It was really surprising to me that Floridians were more in favour of changing policy than the rest of the country.”

A particular surprise for some were the results in Miami-DadeCounty, long considered a stronghold of pro-embargo sentiment and represented in Congress by perhaps its two most outspoken foes of the Castros’ rule – Republicans Reps. Ileana Ros-Lehtinen and Mario Diaz-Balart. Sixty-four percent of respondents in the country said they supported normalising ties or engaging Cuba more directly.

In response, Ros-Lehtinen denounced the poll, charging that it had been “conducted with a political agenda to help justify the disastrous policies toward Cuba by President Obama,” and denouncing the participation in the survey’s release of Arizona Republican Sen. Jeff Flake, “Castro’s cheerleader in the Senate who obsessively lobbies to lift sanctions on the dictatorship.”

Flake, who appeared alongside Democratic Sen. Patrick Leahy at the survey’s release, noted that on Monday he had attended a reception marking the 20th anniversary of the lifting of the U.S. trade embargo against Vietnam and noted that it was now one of the nations with which Washington hoped to conclude the Trans-Pacific Partnership (TPP) trade accord. “Why can’t we move forward with Cuba?” he asked.

For his part, Leahy, a senior Democrat who has visited Gross twice in Havana, called the poll a “major, major step forward” and urged Obama to remove Cuba from the terrorism list. He said Gross’ continued detention was a “stumbling block, but let us go forward.”

Jim Lobe’s blog on U.S. foreign policy can be read at Lobelog.com