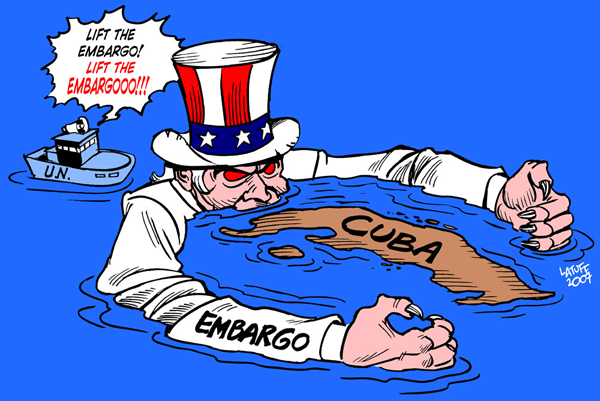 Our policy to isolate Cuba through the embargo has only isolated ourselves. Last year the United Nations General Assembly voted, like they do every year for the past 22 years, to condemn the United States’ economic embargo on Cuba - 188 countries were in favor of condemning the embargo, two countries were against the condemnation, the United States and Israel, and three countries abstained from voting, Marshall Islands, Micronesia and Palau. Cuba’s Minister of Foreign Affairs, Bruno Rodriguez Parrilla, introduced the text of the United Nations resolution and said:

“The human damages caused by the blockade are incalculable, with 76% of Cubans living under its devastating effects since the day they were born. The resulting economic damages accumulated after half a century amounted to more than $1 trillion. The embargo is also the main obstacle to broader access to the Internet, the free circulation of persons, the exchange of ideas and the development of cultural, sport and scientific relations.”

President Obama has already taken steps since his first term to change the conversation with Cuba. He has allowed for Cuban-American families to travel freely to the island, opened up general licensed travel for educational exchanges and religious travel, and re-established the people-to-people travel category that allows any U.S. citizen to apply to this educational exchange program and experience Cuba first-hand. And last December, President Obama and President Castro took unprecedented steps to greet one another with a handshake at Nelson Mandela’s memorial service in South Africa.  All of these actions show that it is not impossible for us to have a better policy towards Cuba.

While getting rid of the embargo does lie in the hands of Congress, President Obama can do a variety of things within his executive authority to continue on a new path with Cuba. These items include:

All of these actions would not only benefit our own interests in Cuba, but it would lay the groundwork of trust and mutual respect that are essential in repairing a 52 year old antagonistic relationship