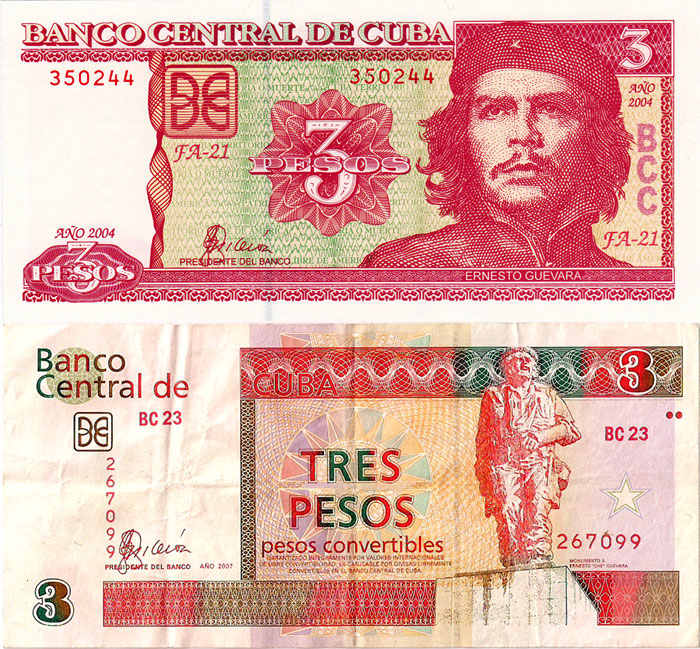 Among the key aims in the process of ‘updating’ the Cuban economy, approved by the 6th Congress of the Cuban Communist Party in 2011, is the reunification of Cuba’s two currencies: the Cuban Peso (CUP) and the Cuban Convertible Peso (CUC). In October 2013 it was announced that steps towards this had begun. The CUP has been Cuban currency since 1961. In 1993 during the economic crisis of the Special Period, the US dollar was legalised and ‘dollar shops’ initially opened to sell non-essential or imported items to tourists, as the tourist industry became a growing source of income. The CUC was introduced in around 1993 to substitute the function of the US dollar. It was pegged to the US dollar but printed and controlled by the Cuban Central Bank. Helen Yaffe reports.

In the 1980s, the peso/dollar exchange rate had been 1:1. During the economic crisis, however, the value of the peso fell massively against the dollar in the informal market. Cuban economist Pavel Vidal Alejandro explains that: ‘This [depreciation] was accepted by the government network of exchange houses (Cadeca) created in 1995 to effect operations with Cubans and tourists. However, the new value of the Cuban peso never reached the accounting and exchange operations of the business sector. Institutions continued to operate with the official exchange rate of the 1980s – 1 Cuban peso (CUP): US$1.’ (Cuba Standard) The current exchange rate for individuals is 24 CUP to 1 CUC, but it remains 1:1 in state-owned companies.

In 2004 Cuba ‘de-dollarised’; the US greenback was removed as legal tender. The elimination of the US dollar from domestic commerce became imperative following renewed attacks by President Bush’s administration to prevent Cuba from accumulating or trading in hard currency – a Cuban Assets Targeting Group was set up to stop dollar flows into and out of Cuba.

Cuban salaries continued to be paid, for the most part, in CUP, while many consumer goods are retailed in CUC. The average monthly Cuban salary in 2012 was 466 CUP, equivalent to nearly 20 CUC. Cubans may receive hard currency or CUC via remittances sent from abroad, tips in the tourism sector, or if they have a salary component paid in CUC (usually in joint ventures with foreign companies). Those without access have an extremely limited capacity to purchase goods sold in CUC. As Raul Castro himself recognised in 2007: ‘wages today are clearly insufficient to satisfy all needs and have thus ceased to play a role in ensuring the socialist principle that each should contribute according to their capacity and receive according to their work.’ In 2005, Fidel Castro referred to ‘the dream of everyone being able to live on their salary or on their adequate pension’. However, it is important to recognise that many essential costs, and those that consume the largest portion of family incomes in most countries: rent, utility bills, transport, education and healthcare costs, are negligible or non-existent in Cuba. The Cuban salary does not determine Cuban consumption in a broad sense.

Not only is the currency differential a source of irritation and inconvenience but it has also created serious economic distortions. For example, after receiving free education and training to the highest levels, many qualified Cubans leave their area of expertise to find employment that brings them access to CUCs and a higher level of consumption. Inequalities in access to CUC exacerbate pre-revolutionary socio-economic inequalities, undermining the impressive progress made by the socialist revolution. On the whole, wealthy, white Cubans – the first to leave Cuba after the Revolution – have done better in exile, where they are integrated into racist, class structures, and therefore send back more remittances to families remaining on the island.

The 1:1 exchange rate in state enterprises is particularly problematic. It means that for accounting purposes it makes no difference to those companies if they sell their produce internally for Cuban CUP, or if they export it for Cuban CUC, even though the monetary value to the Cuban government is significantly different. This obscures economic losses and surpluses in their accounts. For example, if a cigar factory sells 100 cigars for 5 CUP each within Cuba, it earns 500 CUP or 20 CUC ($18). However, if it exports 100 cigars for 5 CUC each, it earns 500 CUC ($480). This is a simplified example, but the point is that the process of updating the Cuban economy aims to increase productivity and efficiency, and the dual currency has become an obstacle. It obstructs evaluation of economic performance and removes incentives to increase productivity and exports.

On 22 October 2013, the government announced that it had initiated the process of monetary unification: ‘monetary and currency exchange unification is not a measure which will, in itself, resolve all of the economy’s current problems, but its implementation is indispensable to re-establishing the value of the Cuban peso and its function as money; that is to say, as a unit of accounting, payment and savings.’ The first stage will affect the Cuban state-entities, ‘with the purpose developing the conditions which will lead to increased efficiency, more accurate measurement of economic activity and incentives for those sectors which produce goods and services for export and to replace imports.’

The Cuban government’s methodology usually involves patient and careful testing of new policy initiatives. In this case since December 2011, the government established a special exchange rate of 7 CUP:$1 for direct transactions between state hotels and restaurants and agricultural cooperatives. In 2013 this exchange rate was raised to 10 CUP:$1 – effectively a 900% devaluation of the Cuban peso. There is still a long way to go before the enterprise exchange rate and that used by individuals – both Cubans and tourists – is equal, and Cuba returns to having one currency.

The 22 October statement reassured Cubans that no one with legally held CUCs would see their value fall in the process of monetary unification, as the current exchange rate would be used to calculate the value of CUCs in CUPs. From 2014: ‘Experimentally, in selected sites, CUP payments will be accepted in cash for the equivalent, based on the current Cadeca exchange rate of 25 CUP to 1 CUC.’ In Cuba the news was greeted positively. The process of monetary unification could take three or more years, but it is an important step in the process underway – improving the Cuban economy and defending the gains of socialism.